There are a few questions that have been on my mind for quite some time. Why is it that my life became more difficult when I decided to pursue righteousness and live for Christ? Why does it seem like life is easier for my non-believing friends? The concept of suffering for righteousness is difficult, but one we can overcome by grace. Desiring the life we had before salvation is a deceptive mind-set with no substance- we belonged to the enemy.  Now belonging to Jesus and salvation being our portion, spiritual attacks increase upon the children of God. Self-pity only makes one feel worse and discipleship never meant our earthly lives would become easier for accepting Jesus into our lives.

An example of this is John the Baptist. Born to obedient parents (Luke 1:6 Both of them were righteous in the sight of God, observing all the Lord’s commands and decrees blamelessly), his birth was predestined and foretold by his father having an encounter with an angel:

Luke 1:13-17 But the angel said to him: Do not be afraid, Zechariah; your prayer has been heard. Your wife Elizabeth will bear you a son, and you are to call him John.  He will be a joy and delight to you, and many will rejoice because of his birth, for he will be great in the sight of the Lord. He is never to take wine or other fermented drink, and he will be filled with the Holy Spirit even before he is born. He will bring back many of the people of Israel to the Lord their God.  And he will go on before the Lord, in the spirit and power of Elijah, to turn the hearts of the parents to their children and the disobedient to the wisdom of the righteous—to make ready a people prepared for the Lord.

Moreover, he was the cousin of Jesus and was already a blessing before he was even born (Luke 1:41 When Elizabeth heard Mary’s greeting, the baby leaped in her womb, and Elizabeth was filled with the Holy Spirit). When the angel delivered the message concerning John the Baptist to Zechariah, he did not say that he would suffer for righteousness but spoke about the blessing he would be to God’s people.

As John the Baptist pursued his God ordained purpose, he did not eat the fanciest food, nor was he dressed in royal robes (Mark 1:4-6 And so John the Baptist appeared in the wilderness, preaching a baptism of repentance for the forgiveness of sins. The whole Judean countryside and all the people of Jerusalem went out to him. Confessing their sins, they were baptized by him in the Jordan River. John wore clothing made of camel’s hair, with a leather belt around his waist, and he ate locusts and wild honey). He lived a humble life, and far for what the earthly standards would portray as ‘being blessed’.

Whilst doing the work of God, people would speak maliciously of him, yet he was blameless (Luke 7:33 For John the Baptist came neither eating bread nor drinking wine, and you say, ‘He has a demon). One would wonder why a blessed man of God and a cousin of Jesus would undergo persecution. Moreover, the innocent man was brutally murdered, simply for speaking the truth:

(Luke 14:3-12 Now Herod had arrested John and bound him and put him in prison because of Herodias, his brother Philip’s wife, for John had been saying to him: “It is not lawful for you to have her.” Herod wanted to kill John, but he was afraid of the people, because they considered John a prophet. On Herod’s birthday the daughter of Herodias danced for the guests and pleased Herod so much that he promised with an oath to give her whatever she asked. Prompted by her mother, she said, “Give me here on a platter the head of John the Baptist. “The king was distressed, but because of his oaths and his dinner guests, he ordered that her request be granted and had John beheaded in the prison. His head was brought in on a platter and given to the girl, who carried it to her mother. John’s disciples came and took his body and buried it. Then they went and told Jesus).

Whenever the trials of this world overwhelm you and it seems you are the only one encountering suffering, remember John the Baptist. His character, calling and ministry. His suffering was beyond his life, and through him, God has made the way for all of us. Even for you, He will use your suffering to become a testimony and to save generations from perishing- it is beyond what we can see!

Jesus encourages us on suffering by stating the following:

Matthew 11:7-11 As John’s disciples were leaving, Jesus began to speak to the crowd about John: “What did you go out into the wilderness to see? A reed swayed by the wind? If not, what did you go out to see? A man dressed in fine clothes? No, those who wear fine clothes are in kings’ palaces. Then what did you go out to see? A prophet? Yes, I tell you, and more than a prophet.  This is the one about whom it is written: I will send my messenger ahead of you, who will prepare your way before you. Truly I tell you, among those born of women there has not risen anyone greater than John the Baptist; yet whoever is least in the kingdom of heaven is greater than he.

We thank God that He has chosen us to partake in His suffering and that of John the Baptist, for we are indeed blessed.

I want to encourage you today to take courage, you are not alone. Within the body of Christ, we all encounter struggles differently. There are people in the bible who experienced worse struggles than we have faced and yet God was pleased with them. It was the way He had preordained their lives to be and as disciples of Christ we will suffer for righteousness. No matter what arrow the enemy tries to throw your way, you shall overcome, the goodness of the Lord shall remain over your life and salvation shall remain your portion in Jesus name. 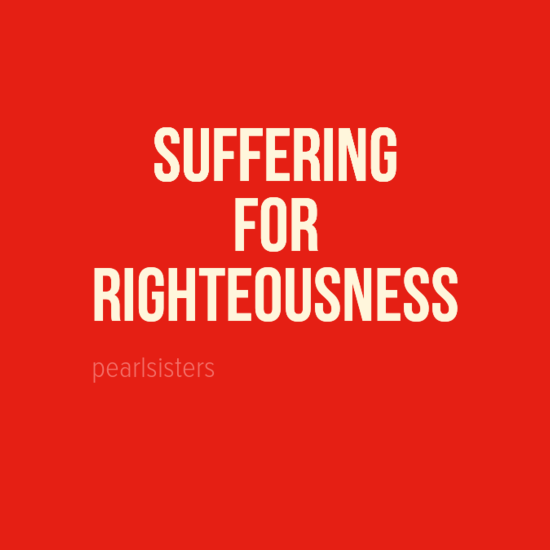 10 thoughts on “Suffering for righteousness”